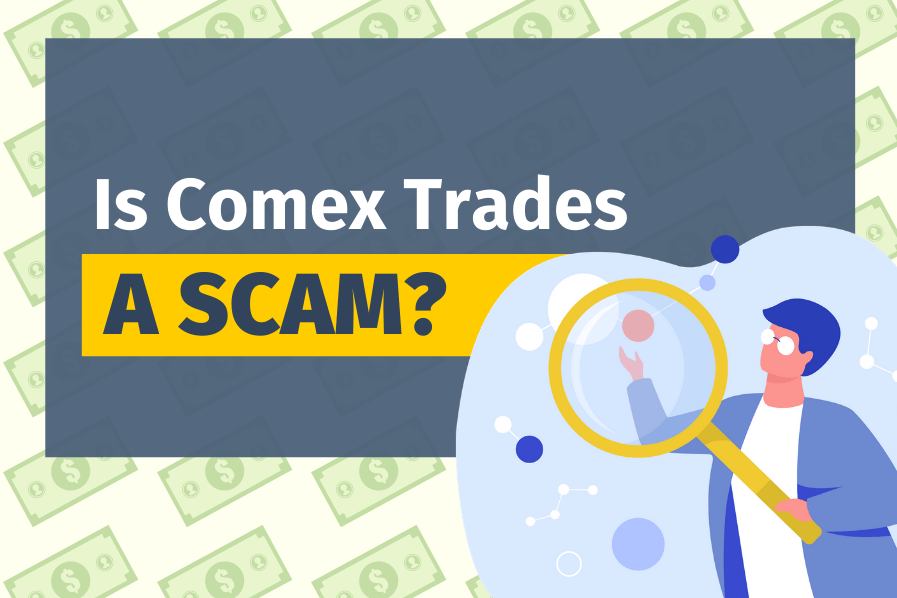 For every legitimate MLM company out there, there are a million scammers that are trying to squeeze its affiliates for every penny they’ve got. This is why you should be incredibly careful with how and where you invest your money. We get that you want to make some extra cash online, but is going the MLM route the right way?

More specifically, is Comex Trades, an MLM company that has become increasingly more popular as of late, the right option? Before you throw your hard-earned money at this company, ask yourself: is Comex Trades a scam? Check out our review of the Comex Trades and why it’s a waste of time.

What Is Comex Trades?

Opening up the Comex Trades corporate website is a complete waste of time. If you’re looking for information regarding what the company is and how it makes its money, you’ll have to rely on word-of-mouth information since the site doesn’t provide anything at all.

The company does have YouTube videos with Raymond Stokes, the alleged CEO, promoting this shady business. Don’t waste your time looking for the video—it’s poorly dubbed, and the office space gives off rented vibes. Comex Trades does have a UK-based address, but that doesn’t prove anything.

Lots of MLMs will have a physical address that’s linked to some rented space, and if you visit the address, you’ll find a cardboard sign with the company’s name written in marker.

What Does Comex Trades Have to Offer?

Nothing. Comex Trades doesn’t manufacture or distribute anything. This means that you, the potential affiliate partner, are the product. You’ll have to sell recruit new members to make money, and this process continues until the company collapses. And believe us when we say that if Comex Trades continues doing what it does, it will collapse in the near future.

What Does It Cost to Join Comex Trades?

Membership is totally free. However, as a member, you have no access to any of the perks, which you won’t know about until you pay.  To get in on the Comex Trades biz, you need to hand over between $10 and $50,000. That’s a pretty wide margin, if you ask us, but according to the business model, “The more you invest, the more you’ll earn.”

How Do You Make Money with Comex Trades?

Glad you asked. If things weren’t suspicious enough already, here’s where your bullsh*t detector should be going off.

Similar to any MLM out there, legit or otherwise, Comex Trades offers a percentage of a new member’s registration fee to the referrer. Affiliate members can receive referral commissions down to the third level. From the first to third, you’ll get 5%, 2%, and 1%, respectively.

There are only three things guaranteed in life: taxes, death, and trouble. There’s no way any brokerage firm, a savvy investor, or an MLM company can guarantee returns on any investment, yet here we are. According to Comex Trades’ compensation plan, they promise the following:

What’s there to like? Comex Trades is bogus through and through. It’s similar to Ponzi schemes I’ve reviewed in the past, i.e. Adora Investment and Throne Legacy Capital.

Grab your pitchforks, ladies and gentlemen. We’re going to talk about what fishy side of Comex Trades.

Who is the founder?

If you’re going to toss money at a new venture, you should get as much information as possible regarding the founder(s) and key players. Even as an angel investor, you’d like to know who’s running the show, would you not? And since Comex Trades keeps their founder in the shadows, we’re more than certain that the company has something to hide.

Where does the money come from?

The company promises a percentage of returns after a certain number of days. We’ll get to that in a moment, but let’s focus our attention on Comex Trade’s revenue stream.

Without manufacturing and distributing products, how does the company get its money? It has you, the affiliate member, sell memberships to everyday suckers. The money you generate goes to the very top, while you, the worker, get a tiny slice in commissions. Comex Trades isn’t even attempting to hide its Ponzi-ness!

A leader of a Ponzi scheme, that’s who. There’s absolutely no way that Raymond Stokes or whoever’s in charge of Comex Trades can guarantee a percentage in returns based on your initial investment.

The company will have to continue recruiting new members until everybody in the world is an affiliate member. And when there’s no one left to recruit, the money dries up. All we’re left is Raymond-and-cronies-shaped holes in the wall.

In essence, a Ponzi scheme is similar to a pyramid scheme in how a company only makes money by paying higher-ups with “investments” from the lowliest recruits. This is an unsustainable business, and Ponzi-based companies always end up going belly-up if they don’t change their model.

As such, you shouldn’t be stoked to work with Raymond Stokes, acting CEO of a garbage company. They’re going to take your money, give it to the senior members—i.e., himself and his henchmen—and laugh all the way to the bank after the company inevitably collapses. It’s possible to make money through Ponzi schemes, but it’s unethical, and we’re not going to tell you how.

But what we will say is that there’s a much better way to make money online. Have you ever heard of affiliate marketing?

It’s nothing like MLM—basically, you sign up as an affiliate marketer with large e-retail platforms like eBay and Amazon. You can promote certain product listings and earn a cut of the percentage for every sale you helped create. Best of all, you can do all of the marketing from the comfort of your home. If you have a blog or a social media account, you’re halfway ready to begin!