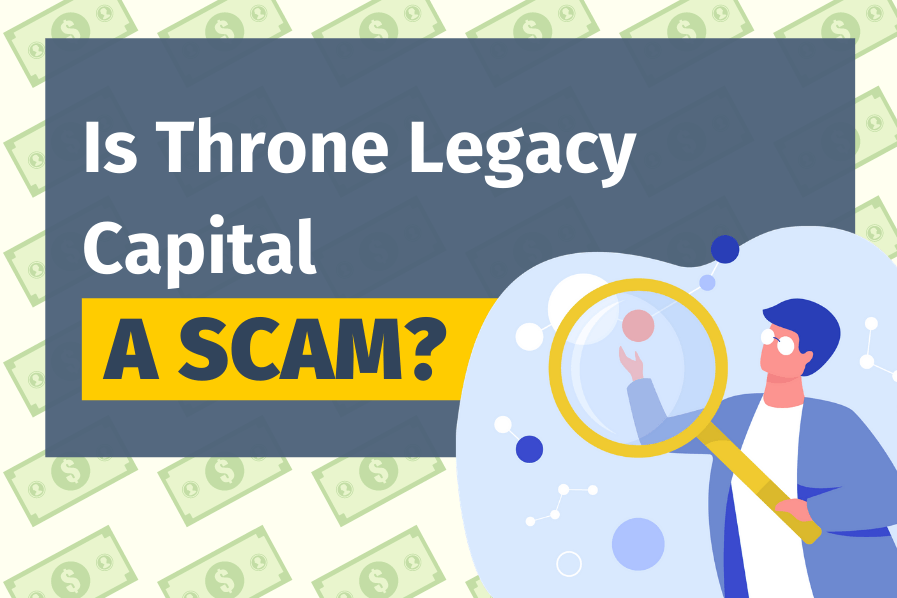 These days, modern Forex trading platforms are always attractive to anyone looking to make passive income. Throne Legacy Capital is one of those platforms that promise significant profits to its users. While its website, TLCGlobal.asia, seems convincing at a glance, there’s more you should consider before deciding to invest your money with Throne Legacy Capital.

So, in this review, we’re going to tackle the question you’ve been wondering: is Throne Legacy Capital a scam?

What Is Throne Legacy Capital?

According to its website, Throne Legacy Capital is an investment management company founded in 2019 in Hong Kong, backed by many trading experts. It claims to use modern technology and infrastructure to become a trustable Forex trading company.

Throne Legacy Capital was founded by Carl Ronny, who claims to have been a part of many investment companies, giving him a long track record of experience in the training industry. Along with him, Kwanky Tse is also credited as Throne Legacy Capital’s CEO.

The information about the founders is quite confusing as it is unclear who the actual founder is and there is no specific company or project that is mentioned as part of Carl Ronny’s claimed experience.

What Does Throne Legacy Capital Have to Offer?

Another offer that they heavily promote is generation bonuses, which are the equivalent of recruitment commissions. The first bonus is generated when an individual recruits another person, forming a team of two.

As the user recruits more team members, more bonuses are promised. Therefore, to unlock these bonuses, the only choice for users is to recruit as many people as possible.

What Does It Cost to Join Throne Legacy Capital?

As previously mentioned, the minimum cost to join Throne Legacy Capital is a whopping amount of $1500. The packages are defined as follows:

The funds are fixed-term for two

years and profits cannot be withdrawn until then.

In order to get more returns on investment, users need to make further investments as well as recruit new members. The system is a typical affiliate rank model in which users get higher bonuses the more investment they make and the more recruitments they generate.

Here are the affiliate ranks of Throne Legacy Capital:

How Do You Make Money with Throne Legacy Capital?

The size of profit a user gets on Throne Legacy Capital depends on the investment and recruitments the user makes. Here are the explanations for each affiliate rank’s profit system:

This is the very basic affiliate rank and it already requires a dazzling investment.

For users who want even more bonuses, they need to make further investments.

As Throne Legacy Capital stresses on generational bonuses, recruitments are the only way to keep getting bonuses. This is pretty difficult since the initial investment fee is very large, to begin with and not everybody a user recruits will want to make such an investment.

For the three highest ranks, users are required to invest in multiple projects as well as recruit high-ranking members. Investing $1500 in more than one project is a pretty risky investment and should be done with extreme caution.

The sixth tier of affiliate rank requires an even bigger, riskier investment with multiple projects. Users also have to make sure their recruited members move higher up the rank to unlock their bonuses.

The highest rank of all requires the most dramatic investment value in ten different projects while also obliging members to ensure their recruits move to the second highest affiliate rank in order to unlock bonuses.

The highest rank of all requires the most dramatic investment value in ten different projects while also obliging members to ensure their recruits move to the second highest affiliate rank in order to unlock bonuses.

Commissions are paid per recorded trade as follows:

For the generation bonus, here is the scheme promised for different ranks:

Users who invest in a GW Package as elaborated above are qualified to earn the following referral bonuses:

As a relatively new company that promises whopping bonuses with huge initial investments, anyone looking to invest in Throne Legacy Capital needs to proceed with caution.

Here are the reasons that Throne Legacy Capital is not trustworthy.

The website of Throne Legacy Capital offers numerous incomplete information. As previously mentioned, the organizational structure is unclear, as well as the biography of Carl Ronny, who is stated as the founder.

To make matters more suspicious, the photos of their claimed headquarters in Hong Kong on their website are merely empty office space, so it is uncertain if the pictures are real.

What makes it more evident is the public warning issued towards them due to the lack of regulated license, which is necessary for any credible Forex trading company.

Throne Legacy Capital has no retail products and it’s heavily reliant on recruitment fee for revenue. It is, therefore, nothing but a Ponzi scam.

If you’re still interested in investing money in a promising venture, we wholeheartedly recommend giving affiliate marketing a try.

I’ve been tricked by Ponzi schemes in the past, and since then, I’ve been solely focused on building affiliate marketing websites. These websites would eventually generate streams of online passive income to reward all of your hard work.

No recruitment and no worries of getting scammed.

Just sign up with one of your favorite e-retail platforms, begin promoting products, and you can earn a cut from any sales you helped to create. This is good, honest work, unlike Throne Legacy that’s just trying to take your hard-earned money away.

It’s easy to start building affiliate marketing sites of your own. I’ve learned everything from scratch from this program and it costs nothing to get started.