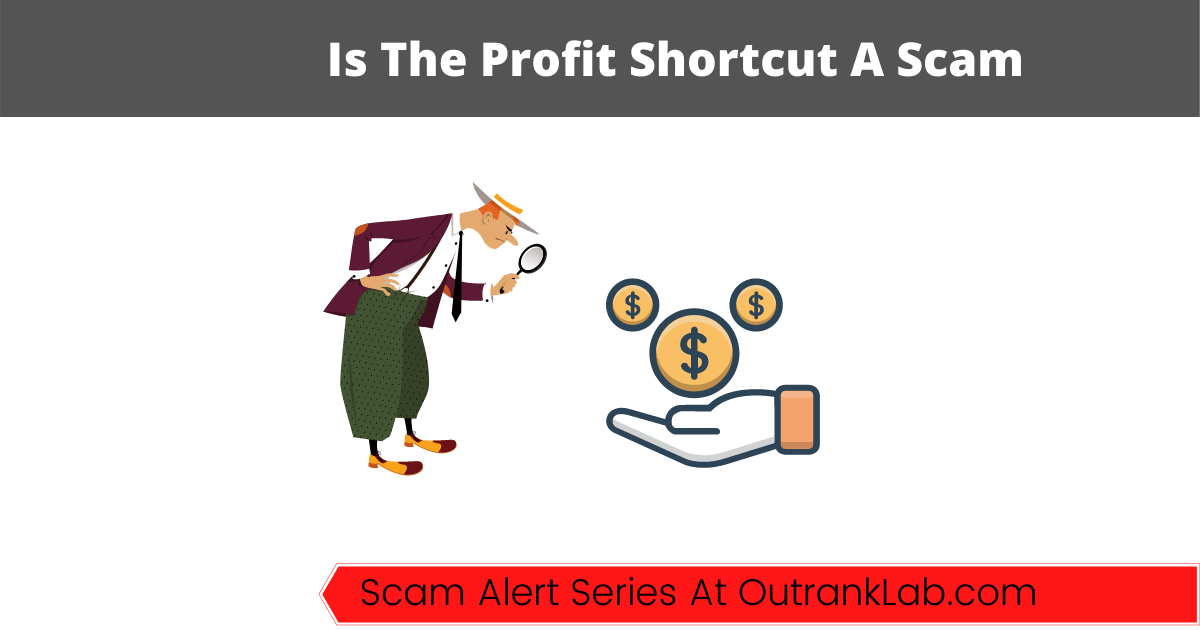 If you’ve gone through that 30+ minutes video of The Profit Shortcut and wondering if it’s as good as it sounds, you’ll find the answers here.

Keysha, whoever it is, has been trying to convince you to sign up for an amazing opportunity that could easily make you hundreds of dollars a day from home.

According to her, no special training or experience are needed. And to be frank, I would be first to sign up if such an opportunity exists online.

But what if The Profit Shortcut is a scam?

It will be a scary journey where you’ll potentially lose tens of thousands of dollars to whoever is running the show.

What Is The Profit Shortcut?

As the narrator, Keysha claims, The Profit Shortcut is an opportunity that let you tap into a billion dollar industry and generate thousands of dollars of commission.

The video doesn’t divulge any more details of what the particular industry is, or how the commissions are made.

It does, however, harp on the fact that how little effort it takes to start making consistent, and enormous amounts of money with the program.

A few video testimonials to kick off the video is a convincing move that will get almost anyone new to internet marketing to sign up.

Unfortunately, the entire pitch is a lie by itself.

I notice the URL ‘SANEARNINGS.COM’ that supposedly published earning reports of people signing up for The Profit Shortcut.

Yet, when entered the URL on the browser, it lead me to The Super Affiliate Network, which anyone could see is not The Profit Shortcut.

Neither is there any earning reports to be found. But things started to fall into place, and it’s pretty clear what The Profit Shortcut is all about.

In the strictest sense, there is no The Profit Shortcut. It doesn’t exist. It is a page that funnels the subscribers to another program called The Super Affiliate Network.

I’ll be covering The Super Affiliate Network in depth in a separate review. What you need to know it’s an affiliate marketing training program and it could get very expensive with the upsells.

The ‘All-in-Package’ which isn’t listed on its website, costs a whopping $17,497. It is inclusive of the $12,497 MAUI mastermind event, where selected members get to meet up with the trainers for additional training.

It’s a far cry from the $27 you paid for the non-existent The Profit Shortcut. And, does it guarantee a $500 monthly income?

Read on and I’ll show you why it’s very unlikely.

What Do You Get For Signing Up To The Profit Shortcut?

As the The Profit Shortcut is just a funnel to another program, you won’t be getting any training from Keysha.

Instead, you’ll be directed to The Super Affiliate Network, where you’ll be tempted with upsells into its affiliate training program and premium coaching.

And if you’ve signed up for the yearly membership, it will cost you an additional $297 (or $2,997 if the discount expired)

You’ll get access to 15 training modules of The Super Affiliate Network and coaching sessions. Remember how Keysha mentioned that no special training are required to be successful?

If it’s so, you wouldn’t need the training modules nor the coaching sessions, which comes at a price.

I’ve been an affiliate marketer for 5 years and it isn’t possible to be successful without training. You’ll need to be trained, try, make mistakes and improvise to get better in the game.

If you sign up for The Profit Shortcut, you’re not getting a built-for-you cash making machine. You’re getting access to affiliate marketing WHILE making Keysha slightly richer in the process.

The Profit Shortcut costs $27, while The Profit Boosting Bootcamp, which is where you’re being sent to, cost $7.

Keysha’s The Profit Shortcut took $20 at your expense. Considering that Keysha is likely to be an affiliate marketer promoting The Super Affiiate Network, she’s likely to make 33% to 77% from other upsells.

Guess who has the better chance of making that $500 per day?

Is there anything commendable about The Profit Shortcut? Apparently so.

Keysha got you covered with a 30 days money back guarantee. Ok. Not Keysha, nor The Profit Shortcut. But it’s The Super Affiiate Network that’s getting your back covered.

If you check out The Profit Shortcut’s refund policy, you’ll find that products from the The Super Affiliate Network are mentioned.

If you’re unhappy with what you’re getting after parting up with $27 or more, you can request for your money back.

What I Dislike About The Profit Shortcut

The money back guarantee doesn’t make this program a decent one. If anything, there are strong reasons to stay away from The Profit Shortcut.

The Profit Shortcut, and Keysha are a pack of lies. The entire video is built on lies, and hoping to draw your emotions and create a sense of urgency into signing up.

It doesn’t matter if there are paragraphs of disclaimers at the footnote. If the video’s claim is debunked later, by itself, it is deceitful.

Keysha mentioned how you don’t need special training or experience to profit from the system.

It seems that, after all, this isn’t an automatic cash machine. You’ll still need to build your skills, and that means go through hours of training.

I also have issues with Keysha charging $27 for The Profit Shortcut, which is in fact an entry to The Super Affiliate Network.

If you sign up for the latters Profit Bootcamp, you’ll only need to pay $7.

First of all, Keysha is marketing a product that doesn’t exist. If Keysha is tricking you into signing up for a different program than advertised, you’ll need to question her incentive.

For me, it’s purely a marketing tactic to increase her own referrals. That itself is not a problem, but hiding behind a fiction product is.

By the end of the video, words like ‘thousands of dollars in commission”, “hundreds of dollars a day” are drummed into your mind.

Keysha made it look easy, with a ‘proven system’.

In affiliate marketing, it is possible to suffer losses or staring at zero income, if you’re not doing it right. There are many factors that comes into play, such as your niche, traffic generation and monetization strategies.

So, before you sign up for The Profit Shortcut or any other affiliate training program, find out how to choose a profitable niche. It makes a great difference.

However, since The Profit Shortcut leads to The Super Affiliate Network, you’ll want to check out what the latter says about making money from its program.

In its earning disclaimer, the average earning generated by affiliate marketers at Super Affiliate Network is between $500 to $2,000 in a year.

That’s a LOW figure by any standards.

Considering that you’ll need to fork out at least $297 for any meaningful coaching, you could be making less than $1,000 in 12 months for all of your hard work.

Sure, there are going to be a small group of high-earners like Keysha, who seems to profit from selling the program itself.

But on average, the limited income potential is a turn off. I’ve made way more than that in affiliate earnings by following the training of this program.

The Super Affiliate Network’s MAUI mastermind package, which cost $12,497, is a costly upsell. It’s marketed as an event where you get to rub shoulders and learn from the top trainers from the program to be successful.

Don’t fall for it.

You can be successful learning from a good affiliate training program, without paying crazy money. If you’re earning an average of $1,000 annually, attending such events are unlikely to significantly affect your earnings, except that you resorted to promoting the high-ticket program itself.

If you do so, you’re straying very close to a Ponzi-like scheme, where people are promoting a program just for the sake of doing so. The program loses value if it doesn’t provide results by itself.

Can You Make Money With The Profit Shortcut?

Still, only a small group of members of SAN are making a decent income from affiliate marketing. Most of them never make more than $2,000 per year, as stated in the income disclaimer.

As for The Profit Shortcut, I’m afraid the program is non-existent. It is just a funnel page for Keysha, a member to generate referral leads to the Super Affiliate Network.

Is Profit Shortcut A Scam?

For a program that is only a cover to lead unsuspecting users to a different program, I’ll say that Profit Shortcut is a scam.

It doesn’t exist and until you’ve paid $27, you wouldn’t know that what you’re signing up is the Super Affiliate Network.

Considering that the SAN’s Profit Boosting Bootcamp only cost $7, you’re paying an additional $20 via Profit Shortcut.

Yup, you’re paying more for the same program that you can join if you’ve sign up at The Super Affiliate Network home page.

Furthermore, The Super Affiliate Network isn’t as promising as it claims to be. With the majority of the members earning below $2K per year, I’ll be looking for a better option.

I’ve made more than that amount with this program, which offers legit affiliate marketing training without hidden upsells.