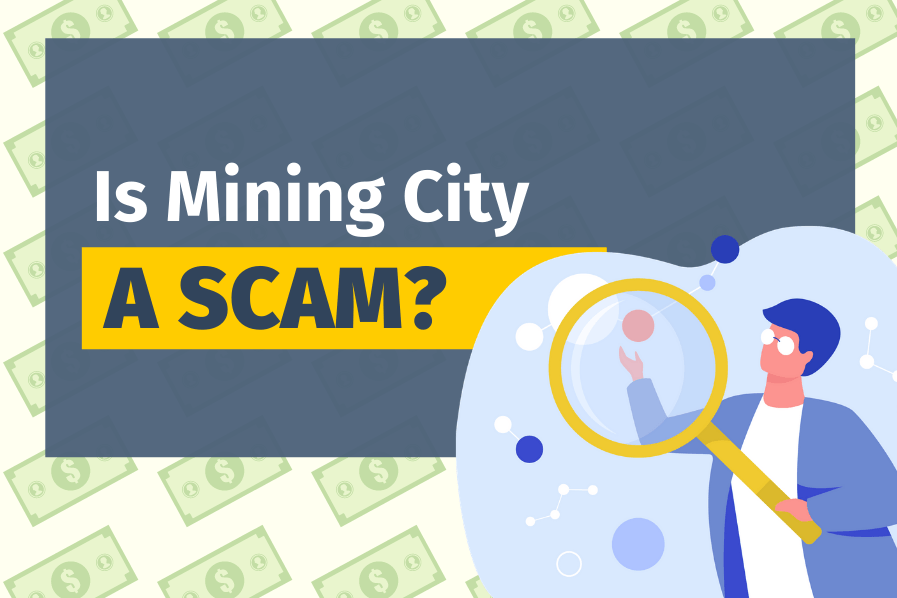 With the lure of guaranteed crypto-mining profit, Mining City has gained a large Asian user base. However, is Mining City a scam? Or is it a quick and assured investment program that’s worth paying for?

Before you sign up and fork out $300 for its ‘cheapest’ plan, read this review to the end. It may just save you the heartache of losing more in the end.

What Is Mining City

Mining City markets itself as a Bitcoin mining platform. According to the site, it manages the technology and the mining part so that you don’t have to. What you need to do is to invest in the mining operating with any of its plans, wait for the plan to mature, and redeem your profit.

Initially, Mining City offers packages for bitcoin mining, but it has since introduced a new BitCoin Vault investment plans. It operates on two similar websites, miningcity.com and miningcitynetwork.com.

According to the website, Mining City’s miner hardware is located in Kazahkstan and you’re assured of daily interest in Bitcoin daily. That’s a 100% guaranteed return regardless of the percentage.

Before we explore what’s inside Mining City, here are some quick facts about bitcoin mining you need to know.

Now, let that sink in.

What Does Mining City Offer?

In terms of retail value, Mining City offers neither products nor services. It offers packages priced at different amounts, which turns you into an ‘investor’ of the mining operation.

The price of each package correlates with the mining power, measured in Tera-Hashes per second (TH/s), and the binary point, which is used in the compensation plan.

Mining starts 10 days after you bought a particular plan. On the 11th day onwards, you’ll start receiving profits in Bitcoin. However, you can’t withdraw the profit yet as each package takes 1,100 days to mature. That’s for about 3 years.

This means you won’t be seeing any money until the 3 years are up, or you can take part in Mining City’s generous compensation plan.

How Does Mining City’s Compensation Work?

Besides offering bitcoin mining plans, Mining City also has a rather sophisticated MLM compensation structure. It rewards members who actively recruit new members and commit to larges investment themselves.

Here are what’s on the table.

Mining City operates on a 2-leg tree. Each member will a single recruitment spot on the left and right. The binary tree bonus is rewarded on the completion of completing 5 binary points on both the left and right legs.

The completion, which is called a cycle, earns the member $200 in commission.

When you’ve built a team in Mining City, you can also earn when your downlines completed a cycle.

Plan bonus ranges between 5% – 10% and is awarded when your team members purchase a new plan.

If you’ll want to maximize your potential earnings as an affiliate, you’ll have to upgrade your rank in Mining City. The process involves investing more money and referring more people to the program.

If this doesn’t sound like a senseless pay-to-play Pyramid scheme to you, I don’t know what is.

Honestly, I can’t say there’s anything I like about Mining City. It’s just another program like CyberChain, which isn’t a good thing.

In true investment, there is no such thing as a guaranteed profit. There is no guarantee of how long it takes to successfully mine Bitcoins, especially when the process is incredibly more difficult now.

This is the #1 red that you need to be aware of.

2. It’s Flagged by the Philippines SEC As a Ponzi

Mining City is actively recruiting members in the Philippines, and it doesn’t go well with the local authority. Philippines SEC confirmed that Mining City is not registered nor regulated in the country.

But what’s worrying (but not surprising) is how the regulatory body raised an alert of a potential Ponzi scheme in play.

What happened with Mining City is the so-called Bitcoin profit is, in fact, derived from the fee paid by new members. You’ll receive the daily profit as long as there are new members joining the program.

However, once the recruitment slows down, you’ll find it difficult to withdraw the fund even if you have tens of thousands in earning.

That’s what a Ponzi scheme is all about.

Handing over $300 an unknown amount of return in 3 years may not be a huge sum right now. But the idea of making money with Mining City fast is to participate in its MLM program.

Still, there are some people where $300 is everything they could afford. (I was once such a position). Placing your life’s saving in an investment flagged by a government regulatory body isn’t a good idea.

If you’re not into the MLM game, your only hope of getting back the money is to pray that the daily returns are significant and you’ll have no issues in withdrawal 3 years later.

Is Mining City A Scam?

Some people think that just because you’re seeing profits materializing in the dashboard, the said program is not a scam.

Or if you can make a couple of withdrawal, you’re not getting scammed.

For me, a scam is a dishonest program that pretends to be something it’s not. A scam always sounds too good to be true.

Low risk, high returns, and guaranteed returns are some of the buzzwords for scams.

If some members are getting paid by Mining City right now, that’s great. But it doesn’t change my opinion that it’s an outright Ponzi scam.

I’ve got burnt by similar programs in the past, and the ending was always ugly.

So, yes, Mining City is a Ponzi scam.

It depends on what you’re trying to do. If you have a stash of cash and do understand the risk of investment. I’ll suggest trying out a platform like e-toro.

I invest through social trading where I copied the signals of experienced investors. Again, there is no such thing as guaranteed returns in investment.

Or, if you’re into starting an online business but you’re not fond of the MLM-stuff, I’ll suggest trying out affiliate marketing.

With affiliate marketing, you don’t have to worry about recruitment, upgrading ranks or spend hundreds of dollars stocking up products.

It’s just a matter of connecting prospective customers to vendors and make commissions from the start.

It cost $0 to get started with this program, where you’ll get access to top training, sophisticated tools, web builder, and more.

Sure, there’s a monthly cost that comes after the free trial, but it’s still way lower than that $300. Besides, you don’t need to wait 3 years to start seeing money flowing to your bank.