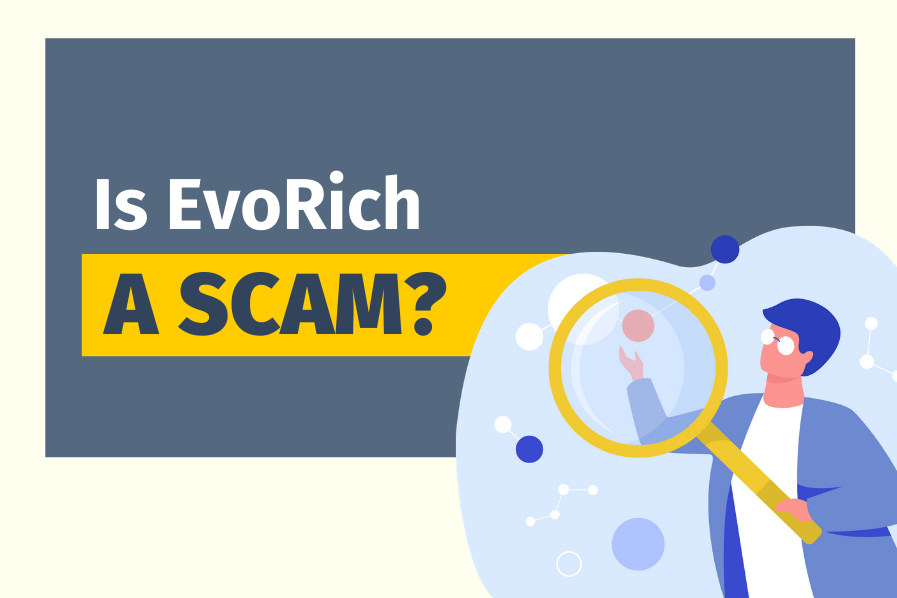 If you’ve visited EvoRich homepage and wondering if it’s a scam, I wouldn’t blame you. Anyone would, given that the website lacks information on what it really does.

It would also be foolhardy to give away your email to a site that gives very little away. Naturally, you’ll do some research and find out if EvoRich is a scam or a legit opportunity.

Thankfully, it’s very hard to stay obscure on the internet. A little sleuthing gives away what EvoRich doesn’t want the public to know.

So, don’t give away your email yet and read this article.

There’s very little information on EvoRich on its website. All you get are vague ideas of how it provides a tool that lets you run your own business and opens up the gateway to unlimited earning. It uses terms like ‘financial independence’, international business’, and ‘multilevel marketing’ to create a sense of legitimacy.

The website doesn’t disclose who is the owner of EvoRich nor the team that runs its operation. Yet, a little digging on the internet shows that the owner is Andrey Khovratov. Mr. Khovratov was involved in Skyway Capital, which is a known Ponzi scheme.

EvoRich is a rebranding exercise of Skyway Capital’s venture into the crypto Ponzi scheme and was introduced in 2020.

EvoRich doesn’t state what product or services it offers on its site. But that doesn’t stop some of its members from making YouTube videos out of it and making the information public.

Beneath all the pleasantries of international business and such, EvoRich’s deal is a series of investment packages based on its own token, the WCRU. Members pay real money for the WCRU, which is then parked under the company for certain durations.

By investing in WCRU, members receive ROI of up to 5% per month.

Here are the investment packages offered by EvoRich.

The value of WCRU in respect to USD is decided by how much of the former is being invested. The more members participate in its investment scheme, the higher WCRU is valued.

How Do You Make Money With EvoRich

You can sign up, convert some of your hard-earned money into WCRU, and park it for the monthly returns.

Or, you can increase your earning by participating in its MLM business and enjoy its compensation. EvoRich features a unilevel MLM structure, which means your immediate recruits are placed directly below you and you can potentially enjoy unlimited tiers of residual commission.

Now, the limit of your earnings is dependent on your affiliate rank. In other words, it depends on how much WCRU you’ve invested and how much members you’ve recruited and their subsequent investment.

There are 8 ranks in EvoRich’s MLM ladder.

Meanwhile, a President level member is entitled to the following commission:

Members can also earn an unspecified amount of reward when they have upgraded their ranks. They are also entitled to dividends when the WCRU investment reaches a certain threshold.

All the earnings are paid out in WCRU or USDU, which is another token created by EvoRich.

Nothing. I’ve seen numerous similar Ponzi ( and have foolishly invested in a few). Nothing good comes out of it in the long run.

EvoRich seems to be reluctant to give away who’s the running the business, what’s at stake for members. All you’ve got when clicking the ‘Learn More’ button is a prompt for your name and email.

For me, it’s very important to know at least the team running a business and what it’s all about before signing up for it. And if it’s an investment-related program, you’ll want to know if the company is regulated (which EvoRich is not), to protect your capital.

A company that operates in secrecy like EvoRich is downright alarming.

No legit investment instruments can guarantee you a fixed return. Not even if it’s powered by bot or any other AI-learning tools. All types of investment have a degree of risk and crypto is known to be more volatile than others.

By claiming that its investment package is offering a fixed monthly return, EvoRich is promising the impossible. Except, of course, that it is paying the investors from other sources of income.

3. Blacklisted by the FMA

The Financial Markets Authority of New Zealand has put Evorich, NEEW and Skyway Investment Group under its watchlist. According to the official statement, these companies and programs bear the hallmarks of a scam.

If a government authority has issued an alert on EvoRich, you’ll want to take heed to it. It pays to stay away from EvoRich and safeguard your money.

Multi-Level marketing isn’t a problem when the business is not focused on recruitment. Companies like Shaklee and Green Compass operate with the MLM structure, but they are legit businesses alright.

Legit MLM focuses on marketing and selling retailable products and services, which EvoRich lacks. EvoRich operates under the pretext of promoting investment packages, which are nothing but a cover for the money-game pyramid.

Verdict : EvoRich Is A Ponzi Scam

It’s very obvious that EvoRich is nothing but a Ponzi scheme. It lures the public into signing up for its investment packages and promoting its programs. The capital invested by new members is used to compensate for the earning and commissions of older members.

There is no real investment with EvoRich because if there is, it wouldn’t be promising a fixed ROI. The only way to do that is to recycle the money paid by new investors, which is a classic modus operandi by Ponzis.

It is not the first, nor the last that will be preying on unsuspecting investors. Similar programs like Liyelipmal and Comex Trades are doing the same. You may see earnings for a while when joining such programs. But when they have difficulty signing up new members, that’s when the problem starts.

So, never give your email away to EvoRich nor trust them with your precious capital.

I’ve been earning a full-time income online since 2016 and there are a few ways to go about it. I’m freelancing at Upwork, which is the largest online freelance portal in the world.

I’m also an affiliate marketer, where I build online businesses that generate passive income. It allows more flexibility in my lifestyle as well as less dependency on a single income source.

Rather than dumping your money into a Ponzi scheme, you’ll be better off learning new skills and building an online business out of it.

Here’s how to get started (for free).