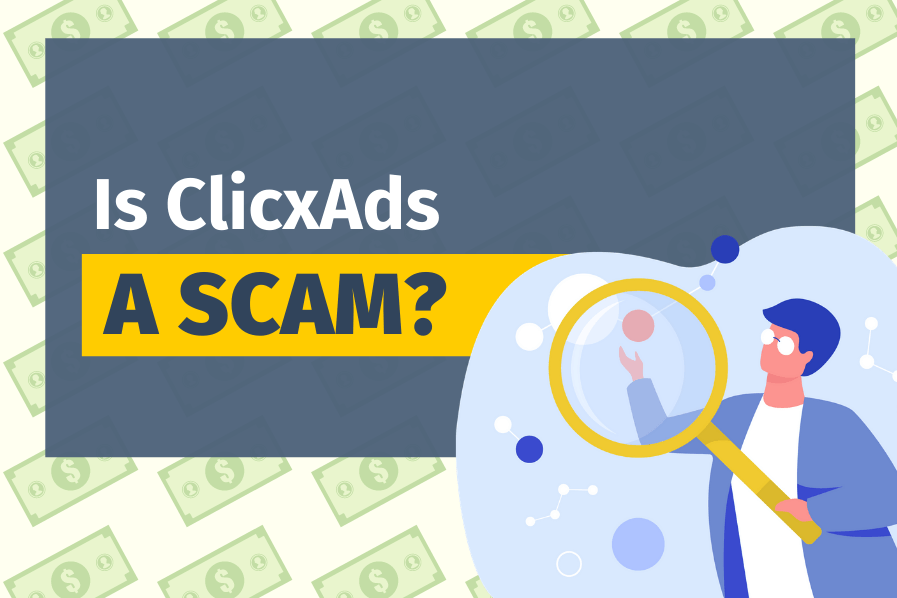 It’s easy to get excited with any money-making opportunities that come with cryptocurrency. ClicxAds, with promises of easy Bitcoin earning by clicking a few ads daily, seems to be an irresistible opportunity.

Not all that glitters is gold, or legit crypto earning program. At least, you ought to be suspicious before committing any payment to ClicxAds. Checking out whether ClickAds is a scam will spare you from terrible heartbreaks in the future.

And that’s what this review is all about. Saving you from losses that could otherwise be avoided.

ClicxAds positions itself as an advertising platform that bridges advertisers and consumers. Yet, it never explains more about how it runs its advertising program on its platform, but harping about the membership packages that could be bought.

Here’s the truth about ClicxAds. It may be an advertising platform alright, but it doesn’t cater to renowned corporate or commercial brands. Instead, the only advertisement that you’ll see on the platform are from other similar programs.

The so-called traffic that ClicxAds deliver to the advertisers originates from its members, who would be busy clicking the ads each day.

Why am I so sure about that?

Because I’ve joined a couple of similar ads-clicking programs in the past and lost all my earnings.

ClicxAds claim to be offering advertisement service, but that’s really a farce. The only people who will be advertising are its members, who are likely to put ads of other similar programs.

The real ‘product’ that ClicxAds is selling is the membership plan. ClicxAds has three types of memberships:

What you’ll get when subscribing to the membership is the ability to purchase AdPanels and enjoy the returns. For the Basic plan, the ROI of the AdPanel is capped at 105%, while the Professional and Enterprise are capped at 111% and 115% respectively.

ClicxAds does not specify the minimum or maximum of how much AdPanel costs. However, it does state that there isn’t a maturity period for the AdPanel. This means that you can be getting the full returns in a few days, weeks, or months.

However, you’ll need to perform daily tasks like clicking a specific number of ads to qualify for the earning. That’s how it ‘generates’ the promised traffic to the ads.

How Do You Make Money With ClicxAds?

The easiest way to make money with ClicxAds is to sign up as a member and buy an AdsPanel. However, be prepared to wait for quite awhile to earn only a small profit.

Just because you’re getting 105% ROI for the Basic membership, don’t assume that you’ll get the returns on top of your deposit.

It doesn’t work that way. Here’s an example.

When you buy an AdsPanel for $100, that $100 will be deducted. Over a period of time, you’ll gradually earn until the value reaches $105. Your actual profit will be that $5, which comes after many days of watching and clicking ads.

Alternatively, you can promote ClicxAds to others, which can be a quicker way of making money (although ethically debatable). As a Basic member, you make 3% commission from the sum invested by your referral.

You can increase your meaning limits by upgrading to the Professional and Enterprise memberships, but that will cost you monthly payments in Bitcoin. On the other hand, recruiting members and persuading them to take up the monthly membership will also secure you a regular earning.

I’m afraid there’s nothing likable about ClicxAds. It’s a pure Ponzi scheme through and through. If you’re pouring your hard-earned earning into the program, be prepared to lose them eventually.

1. No Information On The Owner

Which is not a surprise. Programs like ClicxAds tend to be obscure when it comes to the owner or the team running the program. Would you trust your money to a program that hides its owner in secrecy.

Thankfully, a little digging exposed the owner as a Mr. Frank Nii Okanta Ankrah, who has a history of running other Ponzi schemes.

For inexperienced members, ClicxAds seem to be selling advertisement. Yet, it doesn’t take long to realize that the whole setup is a cover for the Ponzi scheme.

The so-called earning from advertisers are actually funds paid up by new subscribers, which is then used to pay off the ‘investment’ of older members. It isn’t sustainable and it’s only a matter of time before the entire system collapse.

3. It Can Be Expensive

While you can join ClicxAds for free, you’re limited in terms of earning capability. To enjoy better affiliate commission and earning caps, you need to pay up for the Professional package.

Be prepared to fork out approximately $52 worth of Bitcoin monthly to retail the premium perks. There is no guarantee you’ll be profitable at all when buying into the AdPanels. That’s a risk that you need to take.

It’s a brainer and yes, ClicxAds is nothing but a Ponzi scam. It was never in the advertising business and it’s a pure money game in the form of cryptocurrency.

ClicxAds is different from Ponzi schemes like Tonoit and Qtrex, but still a scam alright.

You may get claims that people who joined ClicxAds are getting their payouts. They always do when the Ponzi is at its initial state. It’s only when the members grew and recruitment slows down where the funds start getting stuck.

Take my advice and avoid ClicxAds at all costs. It’s not worth your time and money. Or join and be prepared to get burned.

Risking the entire principal for the sake of 5%, 11% or even 15% isn’t worth it. Neither is spending your time watching ads and clicking on them.

I’ve been through that in the past and I’m not tempted by programs like ClicxAds.

Instead, I’m committed to building online affiliate marketing businesses, which are safer, less risky, and with better earnings too.

If you can afford to fork out $50+ worth of Bitcoin each month, you can afford to build affiliate marketing passive income that pays you multiple times over for years. You don’t have to worry about your income disappearing in months like investing in a Ponzi.

The secret to me making online passive income without getting scammed? It’s in the link below.