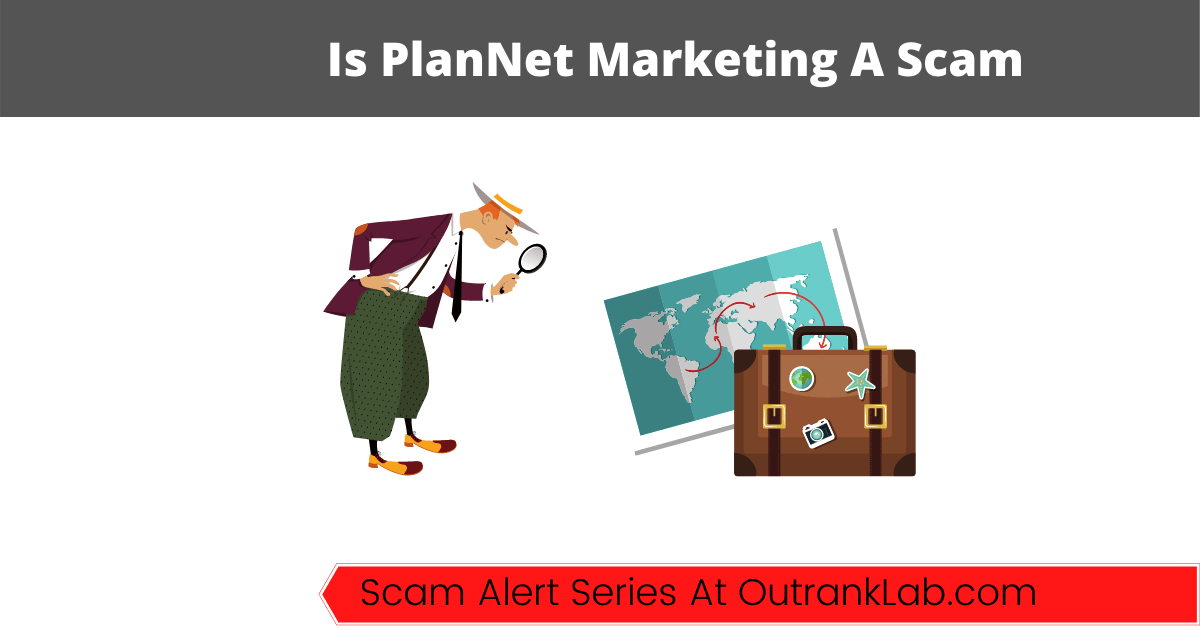 Let me take a wild guess and say that you’re visiting this site because you’ve heard of a great way to earn money without doing much. If you’re skeptical, good. If not, I’m here to tell you why you should be.

One of the first things you should ask yourself when facing such an opportunity is, is there a chance I can lose money in this deal? In the case of PlanNet Marketing, there is.

What Is PlanNet Marketing?

PlanNet Marketing is an MLM with head offices in San Diego, CA, that focuses on selling flight and cruise tickets, hotel reservations, and plenty more travel services to its customers. The company has partnered with the like of InteleTravel to help manage the MLM side of their business to provide its member base with money-making opportunities with future clients.

The company is helmed by co-founders CEO Don Bradley and President/CFO Andy Cathulen. They are both highly experienced in different areas of business, so it was only a matter of time before the two minds joined together to start PlanNet Marketing.

According to the website, PlanNet Marketing was established in 2006. However, I can only assume that the company does more business offline than it does over the internet seeing as how the company attracts very few visitors annually.

What Does PlanNet Marketing Offer?

PlanNet Marketing’s core business is selling travel services to its members and customers, but the company also offers online courses. These courses are aimed at future businessmen and women who plan on utilizing the internet to create a sustainable source of income. Basically, they train you on how to market your business through online avenues.

You can forgo the online training courses (sessions on how to use social media to boost your marketing and sales) and instead opt to purchase one of their ridiculously priced ad setup plans. PlanNet Marketing also offers subscription-based services which supposedly help create ads, edit videos, advertise on YouTube, and track SEO and keywords. Like their one-time setup plans, these prices are inflated beyond your wildest dreams!

Remember how I said that PlanNet Marketing is in cahoots with InteleTravel to help manage the MLM side of their business model? Well, this plan lets you, the average investor, join in on all the money-making action. By registering, you can sell PlanNet Marketing’s travel services to potential customers and earn a cut of the profits.

Or, if you’re more of a people-person and like to create a team of real go-getters, you can focus solely on recruiting and earn a more generous commission for every new person you bring into the PlanNet Marketing team.

What Does It Cost to Join PlanNet Marketing?

So, if you don’t want to utilize PlanNet Marketing’s “amazing” business marketing services and instead want to focus on the MLM side of things, all it takes to hop on board is $179 dollars upfront. Plus another $19.95 to $39.95 every month, depending on which package you purchased, to keep your name in the PlanNet family.

After forking over $238.90, you’ll officially become a part of the PlanNet Marketing marketing team. What this means is that you can begin doing the marketing for the alleged marketing experts! Why should PlanNet pay thousands of dollars to get its name out there when they can have people do it for them while paying the company for this once-in-a-lifetime opportunity? Why indeed…

So, please bear with me as I crunch the number on Windows Calculator

Oh, did I forget to mention that these costs do not cover travel, marketing, training, and miscellaneous expenses? They don’t; all of that comes out of your pocket.

How Do You Make Money with PlanNet Marketing?

You know what they say: “you gotta spend money to make money!” That’s true, especially when working with MLMs like PlanNet Marketing.

PlanNet Marketing offers three distinct avenues of earning an income through its system:

Believe it or not, this is the simplest compensation plan I’ve seen from an MLM in a while. There’s not a lot of confusing jargon and ifs-ands-or-buts in between. The simplicity of PlanNet Marketing’s compensation plan is incredibly refreshing.

First of all, for an MLM to operate within the US, it needs to offer a product or service of real value, not crummy online training courses that teach you what you can learn for free from kindhearted YouTube content creators

In the case of PlanNet Marketing, it’s a legit MLM organization. It actually sells something of value to customers—plane tickets, hotel bookings, and so on—so if the MLM side of the business fails, its paying members can always sell travel services to make money.

2. No False Claims of Instant Wealth

One of the biggest red flags anyone can identify in an MLM company is if it promises instant wealth. “Join our company and makes millions in 12 weeks!” or “Earn 10% on your investment daily!”

PlanNet Marketing clever steers clear of all that nonsense and tells its members upfront that their income potential is dependent on their marketing efforts. Basically, work more, make more, like everything else in life.

Let’s say that PlanNet Marketing has recruited all 328 million people in the US to join PlanNet Marketing. Then what? Obviously, the management team will want to spread out to different countries.

After they conquer every planet, then what? When the money at the bottom dries up, so do the commissions that flow upward. Seeing as how the website isn’t drawing enough attention, I can only assume that the end is possibly closer than you may think.

You can make a few bucks here and there by helping PlanNet Marketing sell their travel packages to potential customers, but if you want to earn twice or five times as much, then you gotta go out and find new members.

Force your recruits to pay the $179 upfront plus monthly subscription fee. Only then will you make the big bucks!

At the time this article was written, the COVID19 plague was in full-force. Travelling is heavily monitored and might even be forbidden in certain countries. A cough or sneeze on an airplane is a cause for mass hysteria.

In short, nobody’s hopping on planes right now, and you’ll have to do a pretty good job at convincing potential recruits otherwise.

To remain aboard the PlanNet Marketing boat, you need to pay around $400 and $600 every year. To put it in perspective, you need to recruit between eight and twelve people every year to cover the membership cost.

Any other costs you incur come out of your pocket, so you’re pretty much in the red unless you’re an expert marketer like Andy and Don (who don’t actually market the business but have you, a paying member, do it for them).

If you’re joining an MLM business, you need to be realistic about its income potential. Besides selling products, you’ll need to spend time in recruitment to make decent earning.

Check out this income statistic of PlanNet Marketing’s members in 2019.

If you ask me, it isn’t the most lucrative business model around.

Verdict: Not a Scam, but an MLM with Limited Potential

Rejoice, everyone, for PlanNet Marketing is not a scam. Like FR3 World and BioReigns, it is perfectly legit.

However, keep your screams of joy down since the earnings potential through the company’s compensation plan is peanuts compared to how much you need to pay to join.

If you’re all for making money online and want the work perks of not communicating very often with people, I highly recommend trying your hand at affiliate marketing. Through affiliate programs, you can promote other people’s products and/or services and earn a cut of the profits without paying an upfront fee to your client.

Basically, every sale you help generate earns profits for both you and the original seller. This is the real win-win opportunity!