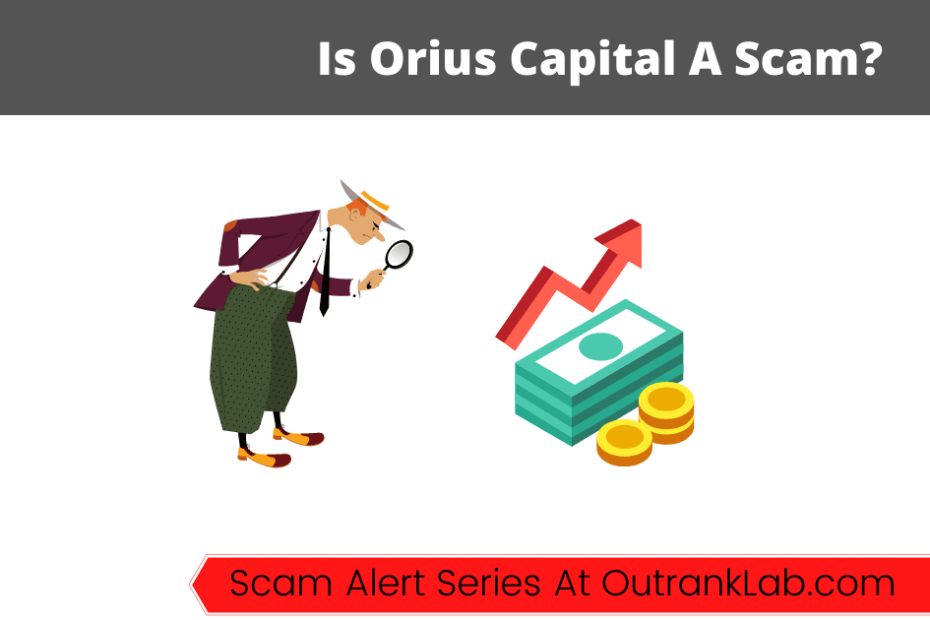 Over the years, the most crucial nugget of knowledge I’ve learned is that profits trump wages in every conceivable way. Taking the risk and running a business can potentially earn you millions but only after years and years of slaving. Even then, there’s no guarantee.

Orius Capital is an AI-powered investment platform that operates in cryptocurrency MLM. The company’s attractive investment and profit packages are aimed to bring in new clients, rich and poor, while dangling promises of vast wealth in no time.

Which brings us to the question: is Orius Capital a scam? After reading my review, hopefully, you’ll come to the same conclusion as me.

What is Orius Capital?

The company’s CEO, Diago Lopez Vea, has been eerily secretive about his life, so much so hardly any of his information is available online. What I could find about Mr. Vea is that he is… the CEO of Orius Capital. No social media page, no Twitch streams, no YouTube channel.

And it’s not just Mr. Vea that’s shady—the entire company is. Orius Capital was founded in Belize by some unknown man or woman and built its headquarters in Hong Kong. This isn’t too surprising since Hong Kong is a tax haven, but its Hong Kong address can be traced back to more than one company. If anything, this is a virtual address that leads to nowhere.

What Do You Get from Orius Capital?

If the origins of and devious higher-ups at Orius Capital isn’t enough of a warning, their compensation packets should be.

Orius’ main goal is to produce an attractive profit margin of up to 2% for its investors every day. However much you put in, between $200 and $100,000, Orius will net you one-fiftieth of your investment portfolio every day. Guaranteed.

Orius Capital doesn’t manufacture or distribute goods, but instead, it offers an affiliate marketing program with lucrative commissions through residual commissions via the ever-famous binary compensation structure.

For those of you who are unfamiliar with the concept, a binary compensation structure consists of an affiliate partner at the top of a binary team. The team is below the partner is the subsequent level comprised of two more people.

Starting from the top, the founder, the team under him or her consists of two people. Each of those people has another team of two to the left and right. The farther down you go, the more levels there. Basically, for every level, it’s the number of people one level above times two.

Is Orius Capital a Scam? Check Out These Red Flags

Sounds familiar, right? If you know even a tiny bit about multi-level marketing (MLM), then your BS meter should be sounding off. But who can tell for certain whether Orius Capital is a scam or not? To help you draw your own conclusion, allow me to talk a bit about the red flags.

Red Flag #1. No Information on the Team/Leader

Either the founder and team of directors are some of the most modest people in the world or they’re totally made up. I can’t tell for certain—perhaps they are a legitimate team of faceless leaders looking to help the common man earn up to two pennies to the dollar every day—but you should always exercise extreme caution, especially when money is involved.

Earning 2% on your investment every day, no questions asked, is a weird way to say they’re going to run away with your money. Nothing is for certain in this world, especially when it comes to cryptocurrency and foreign exchange. It’s irresponsible of the company to claim that they can guarantee any amount of money on your investment.

As I mentioned earlier, Orius Capital offers no tradeable product. Instead, their whole business model is centered around trading. And it’s not even you, the investor, who gets to decide when to buy and sell shares, crypto, and FX. What you’re doing is you’re giving money to a middle man and waiting for 100+% in annual returns to fall from the heavens.

This business model isn’t unique to Orius Capital, either. This is known as a High-Yield Investment Program, which is a Ponzi scheme where organizers (in this case, Orius Capital), use money form old investors to pay off new investors. The aim is to attract new investors where the paying-off cycle is renewed. When it becomes unprofitable to the organizer, they disappear into thin air.

So… yeah… apparently Industry 4.0 has to do something with financial services and trading. The last time I checked, the Fourth Industrial Revolution is the transformation of industrial and manufacturing practices combined with innovative smart technologies. I could be wrong, but a quick search on Wikipedia will show that Orius Capital’s horrible writer didn’t do his or her research. Can’t blame them if there’s no person to blame, right?

A ton of claims with no proof. That should instill confidence in future investors, right? Sarcasm over.

Orius offers no copies of any compliance certificates mentioned on their site, yet we should believe that they’re doing everything by the book? No, just… no…

So, is Orius Capital a scam? I can say with almost 100% certainty that the company is, without a doubt, bogus.

Look, there’s a very small chance that their astonishing claims are true, but if something is too good to be true, it most likely is. The first few levels of their binary structure might see a positive return on their investment, but as the structure grows taller, the more money the organizers have to dish out. Eventually, it will collapse on itself like every other Ponzi scheme before it. Before long, you’ll only find a Mr. Vea-shaped hole in the door (if he even exists!).

So heed this warning, dear future investors looking to get rich overnight: avoid Orius Capital. Tell your friends, family, colleagues, coworkers, enemies, whoever, that Orius is full of it.

Also, stay away from similar investment scams like Auvovia Prime and BizzTrade.

If you’re looking for a legit way to make money online, you’ll want to explore this program. It’s FREE to start and I’ve been applying the tools and knowledge offered to generate online income for years.

2 thoughts on “Is Orius Capital A Scam (2% ROI Daily Guaranteed?)”